Solar energy will soon become “like Wi-Fi or optical fibre” that consumers expect in virtually all buildings and even boats and caravans, according to the inventor of light-weight panels being introduced in Australia.

Shi Zhengrong, once dubbed the “Sun King” when he became the world’s first solar billionaire in 2006, says the weight of regular panels at about 20 kilograms per square metre restricted their use.

His firm, SunMan, has ditched the glass and other materials, cutting weight by about three-quarters while maintaining standard electricity conversion efficiency rates of about 22 per cent. 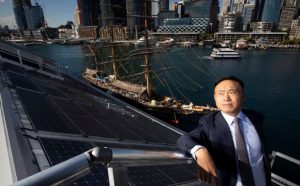 Shi Zhengrong, the founder and chief technology officer of Sunman – the company that has produced new light-weight solar panels that will slash power bills at the National Maritime Museum in Sydney.CREDIT:RENEE NOWYTARGER

“About 40 per cent of the commercial market cannot be served by conventional panels, but with our panels we can make this market possible,” Dr Shi said. Regular panels had “not changed in almost 50 years, still bulky glass”.

On Wednesday, SunMan will unveil its biggest project in Australia to date at the recently installed 235-kilowatt system on the roof of Wharf 7, part of the Australian National Maritime Museum in Sydney.

The 812-panel system cost about $500,000 and will cut the site’s power bill by a quarter. On present prices, the panels will pay for themselves in about seven years, the museum said.

The institution had been shopping for solar since 2015 but could only use the new panels when they became available last year because of the building’s 30-degree roof pitch and weight restrictions.

“The alternative for us is to not have any solar power at all, and to continue to pay our increased power costs,” Kevin Sumption, the museum’s chief executive, said. 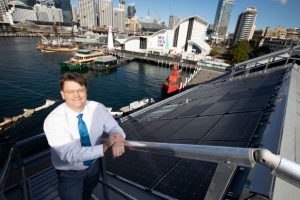 Kevin Sumption, the director and chief executive of the Australian National Maritime Museum, on the roof of the institution’s Wharf 7 building where the solar panels have been installed.CREDIT:RENEE NOWYTARGER

Given the institution’s mission to promote the conservation of oceans, it makes sense to limit its impact on the environment, he said: “We need to be living up to those standards ourselves.”

Other work includes altering the indoor heating and cooling according to the nature of the exhibits.

“We’re talking fractions of degrees and humidity levels,” Mr Sumption said. “They seem small but in terms of managing 50,000 cubic metres of air, the energy impact is enormous.”

Financial support to develop the panels came in part from the Australian Renewable Energy Agency (ARENA). The federal agency joined Softbank China Venture Capital to tip $3.3 million each into a special fund.

A 1 megawatt-sized system, for instance, covering 6000 square metres of panels would add 80 tonnes of weight to roofs. He predicted the panels would make solar farms possible on the urban edges.

“Why does the solar farm have to be in the middle of the desert, 600kms away from the markets” Mr Bell said.

Given their flexibility and weight, the panels can be installed in a variety of places, including vertically.

The new panels are just one of a series of energy products worked on by Dr Shi. These include energy storage using nanotechnology that can store heat directly into batteries at one-fifth the cost of batteries, he said.

The ventures mark the revival of Dr Shi’s career after his previous firm, Suntech, went under amid a rush by Chinese firms into the solar PV market.

“Certainly it was a tough time,” he said. “I saw everything [about human life], the good and the bad”.